Start a Wiki
DS059 Nyarlathotep is a HorrorClix 1.5 monster designed by BLG as part of the Dark Streets custom set.

59. NYARLATHOTEP Cthulhu, Legend
I remember when Nyarlathotep came to my city, the great, the old, the terrible city of unnumbered crimes. My friend had told me of him, and of the impelling fascination and allurement of his revelations, and I burned with eagerness to explore his uttermost mysteries. My friend said they were horrible and impressive beyond my most fevered imaginings; and what was thrown on a screen in the darkened room prophesied things none but Nyarlathotep dared prophesy, and in the sputter of his sparks there was taken from men that which had never been taken before yet which showed only in the eyes. And I heard it hinted abroad that those who knew Nyarlathotep looked on sights which others saw not.
-H.P. Lovecraft, Nyarlathotep

Messenger of the Outer Gods who dwell at the center of the Universe, the horror known as Nyarlathotep is the only one of those terrifying cosmic beings that takes an active interest in humanity- and woe to the people of Earth for having caught His eye! Sinister and mischievous, Nyarlathotep delights in walking amongst an unsuspecting mankind, sowing madness in his wake. This miniature would come with two different figures that can be attached to the dial: one would depict Nyarlathotep in his most common Mask: that of a tall, Egyptian-looking man in a three-piece suit; the other would be a giant mass of wreathing tentacles.
Points: 200
Range: 0/
Plot Twists: +2
M:06-05-04-|-06-07-08-09-10-09-08-07-X Mass Hysteria / Abomination*
A:09-08-07-|-08-09-10-11-12-11-10-09-X Sheppard / Towering**
D:17-16-15-|-13-14-14-15-15-14-13-12-X Shed The Mask*** / Cosmic Avatar (Invulnerable)
D:02-02-01-|-02-03-03-03-04-04-03-02-X Sew Madness (Injection) / Tentacles!****
CTHULHU CABAL Power: The Crawling Chaos- Any monster that damages this monster or a friendly Cabal member must roll a d6: on a 1 it becomes Deranged for the remainder of the game.
*Opposing monsters with a lower point value which attempt to move adjacent to this monster must first roll 4+ on a d6 or take another action.
**This monster is treated as a Giant in all respects.
***When this monster's dial passes the red line, flip this card.
****As per the "multiple attacks" option in the HeroClix power Hypersonic Speed. 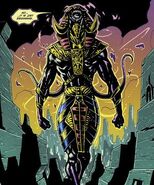 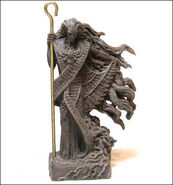 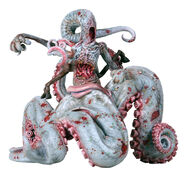 Add a photo to this gallery
Retrieved from "https://horrorclix.fandom.com/wiki/Nyarlathotep?oldid=8250"
Community content is available under CC-BY-SA unless otherwise noted.