Start a Wiki
Gx035 Ghoul Queen is a HorrorClix 1.5 monster designed by BLG as part of his Gothix custom set.

...It was a colossal and nameless blasphemy with glaring red eyes, and it held in bony claws a thing that had been a man, gnawing at the head as a child nibbles at a stick of candy. Its position was a kind of crouch, and as one looked one felt that at any moment, it might drop its present prey and seek a juicier morsel...the dog face with its pointed ears, bloodshot eyes, flat nose, and drooling lips...scaly claws.. mould-caked body...half-hooved feet...
-H.P. Lovecraft, Pickman's Model

That paints a pretty vivid picture, doesn't it? This figure is of course a Giant-sized Lovecraftian ghoul. Lovecraft doesn't mention the abomination's gender, but the Arabian Nights (with which H.P.L. would have been quite familiar) make it clear that ghouls have a matriarchal society. 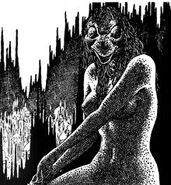 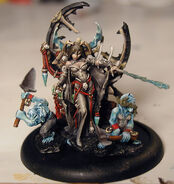 Add a photo to this gallery
Retrieved from "https://horrorclix.fandom.com/wiki/Ghoul_Queen?oldid=7101"
Community content is available under CC-BY-SA unless otherwise noted.