Start a Wiki
Gx049 Count Dracula is a HorrorClix 1.5 monster designed by BLG as part of the Gothix custom set. It is based on the title character of Bram Stoker's legendary vampire novel Dracula.

Within, stood a tall old man, clean-shaven save for a long, white moustache, and clad in black from head to foot, without a single speck of colour anywhere.

... His face was a strong, a very strong, aquiline, with high bridge of the thin nose and peculiarly arched nostrils, with lofty domed forehead, and hair growing scantily around the temples but profusely elsewhere. His eyebrows were massive, almost meeting over the nose, and with bushy hair that seemed to curl in its own profusion. The mouth, so far as I could see it under the moustache, was fixed and rather cruel looking, with peculiarly sharp white teeth. These protruded over the lips, whose remarkable ruddiness showed astonishing vitality in a man of his years. For the rest, his ears were pale, and at the tips extremely pointed. The chin was broad and strong, and the cheeks firm though thin. The general effect was one of extraordinary pallor.

... Hitherto I had noticed the backs of his hands...and they seemed rather white and fine. But seeing them now close to me, I could not but notice that they were rather coarse and broad, with squat fingers. Strange to say, there were hairs in the center of the palm. The nails were long and fine, and cut to a sharp point... -Bram Stroker, Dracula

That would make for a striking figure! In the novel, when Dracula moves from Transylvania to England, Dr. Van Helsing can only guess at his motives- they are never demonstrated in the book. Apparently, in the early drafts, there was a long sub-plot about the Count infiltrating London society that ended up being cut from the final version. Hints of this remain, as Dracula is frequently "away" as Van Helsing & co. hunt him. Ergo: the King of the Vampires relocated to England- then the center of the "modern" world- to personally found the Bloodcall Cabal, in order to usher the then-declining vampire community into the rapidly changing new world! Alas, Dracula was cut down shortly after achieving his goal of re-vitalizing global vampirism, but his legacy has "lived" on...

At the beginning of your turn you may flip this card. 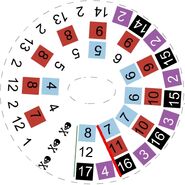 Print & Play Dial
Add a photo to this gallery

Retrieved from "https://horrorclix.fandom.com/wiki/Count_Dracula?oldid=11817"
Community content is available under CC-BY-SA unless otherwise noted.